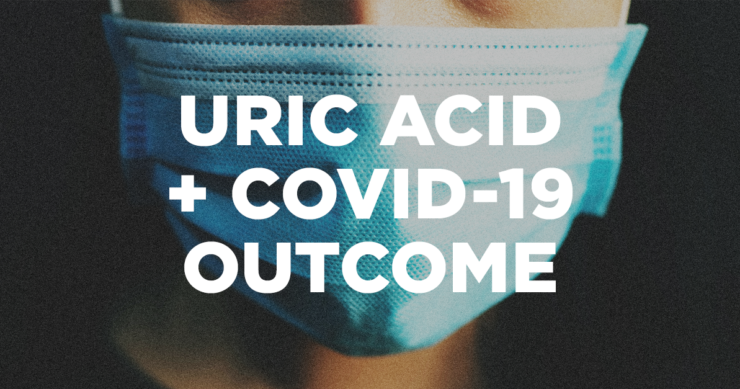 It’s become very clear that various metabolic conditions are associated with worse outcome as it relates to COVID-19 infection. For example, things like obesity, elevated blood sugar, type 2 diabetes, and even hypertension are all associated with a significant increased risk of having a bad outcome if a person becomes infected with SARS-CoV-2.

Exciting new scientific literature has made it very clear that uric acid is in the driver’s seat as it relates to these metabolic conditions. Uric acid has now been described as being a “central conductor” in metabolic diseases. As such, it’s reasonable to consider whether elevated uric acid would be associated with worse outcome as it relates to COVID-19.

To explore this, researchers evaluated patients admitted to the hospital suffering from COVID-19. They specifically evaluated risk of three end points including admission to the intensive care unit, requiring mechanical ventilation, and actual mortality. They then compared these outcomes with measurement of uric acid when these individuals were admitted to the hospital.

The study involves 1,854 patients with an average age 58 years. The results of the study were in fact quite compelling. Having an elevation of uric acid—in this study defined as a uric acid level greater than 7.1 mg/dl—was associated with these outcomes quite dramatically. That is to say, the risk of ending up in the intensive care unit, being put on a mechanical ventilator, or actually dying from this infection were increased by 2.6 times if individuals had an elevated uric acid level on admission in comparison to those whose admission uric acid levels were considered normal. In addition, risk of being put on a ventilator was increased threefold in those with the higher uric acid levels.

These results should not be surprising when current scientific studies have quite clearly identified uric acid as playing a central role in the genesis of all components of metabolic syndrome. Most importantly, there is a direct relationship between elevation of uric acid and risk for type 2 diabetes. Uric acid threatens insulin sensitivity and paves the way for insulin resistance. That, as you might expect, leads directly to elevation of blood sugar, and that sets the stage for a bad outcome as it relates to COVID-19. Elevation of blood sugar enhances the way the virus is able to evade the immune system and compromises immune balance as well.

To be sure, the results of this study cannot be generalized to support a statement that keeping  uric acid level low would offer up a benefit as it relates to outcome if a person were to be infected with COVID-19. That said, it doesn’t argue against that contention. With the ever-increasing body of literature showing how controlling uric acid represents a very powerful tool as it relates to metabolic health, one thing is for sure: getting uric acid levels back to where they belong is an overall good health strategy.

I certainly have spent a great deal of time deep in the uric acid literature as I prepared the Drop Acid manuscript. That said, my recommendation for optimal uric acid levels is 5.5 mg/dl or lower. And what we make clear in Drop Acid is how effective various lifestyle changes and specific supplements can be in helping to achieve this goal.