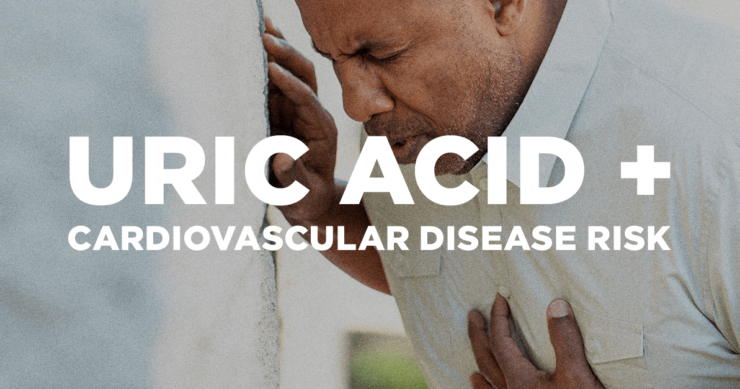 Why is uric acid included on the typical comprehensive blood panel that many people get as part of their annual physical examination? This certainly would be a good question to ask your doctor. Quite likely the answer you will receive will center on the role of uric acid in terms of either kidney stones or gout. But if you don’t have kidney stones and don’t suffer from gout, why would you need to know your uric acid level? As it turns out, this is an incredibly important metric to follow and understand as it relates to far more than simply risk for gout or kidney stones. We now understand that elevation of uric acid strongly correlates with so many disease issues including type 2 diabetes, obesity, dyslipidemia, hypertension, kidney disease, and many other conditions.

Over the past 20 years there has been an ever-increasing body of research that has explored the relationship between elevation of uric acid and cardiovascular disease. But while this relationship may seem like a new discovery, it was actually suggested in the late 19th century.

British physician Dr. Alexander Haig was the first to call attention to the importance of uric acid far beyond its relationship to gout. In his 1894 book, Uric Acid as a Factor in the Causation of Disease – A Contribution to the Pathology of High Arterial Tension, Headache, Epilepsy, Mental Depression, Gout, Rheumatism, Diabetes, Bright’s Disease, and Other Disorders, Haig painstakingly explored the relationship of uric acid to blood pressure, and blood flow, stating:

But not only is the pulse affected in this way by the uric acid, but it in turn affects the circulation in, and the function of, several important organs in a way, and to an extent which leads little doubt as to the real existence of the cause-and-effect of which I have been speaking.

Unfortunately, his prescient observations and publications were almost completely ignored until the early part of the 21st century. Now, we are seeing a virtual explosion in the number of research publications from around the world linking elevation of this seemingly meaningless metabolic waste product to some of our most challenging health issues.

A significant relationship between uric acid levels and coronary heart disease or mortality has been described in two large Asian studies looking at tens of thousands of men and women. This research has shown that having a serum uric acid level greater than 7 mg/dL was associated with a 16% increase risk of all-cause mortality, meaning death from any cause, a 39% increase risk for cardiovascular disease, and a 35% increased risk for stroke.

Uric acid elevation was correlated with an increased risk for mortality from stroke by an astonishing 59% in a large study of Australian men encompassing more than 83,000 individuals followed over a 13.6-year period of time. The increased risk for death from stroke was found when comparing the highest quartile of uric acid to the lowest. In another important study evaluating 1017 patients who had coronary stenosis or narrowing of the coronary arteries as proven by angiogram with greater than 30% narrowing of the artery, a five-fold increase in deaths was seen in patients who had the highest level of uric acid in comparison to those who had the lowest level over a 2.2-year follow up. This was noted in both sexes. Finally, in looking at the well-known Framingham Offspring Cohort Study, the association between uric acid and risk of developing congestive heart failure was evaluated in close to 5000 participants equally balanced between men and women and followed over an average of 29 years. Again, these researchers compared those in the highest quartile of uric acid defined as greater than 6.3 mg/dL with those in the lowest quartile, defined as less than 3.4 mg/dL. The comparison was quite revealing. The risk of developing congestive heart failure was an astonishing six-fold higher in the group with the highest level of uric acid in comparison to those in the lowest quartile. Other research has confirmed not only increased risk of congestive heart failure but also increased risk of death from congestive heart failure when uric acid is elevated. These reports and many others are summarized in a comprehensive review entitled Uric Acid and Cardiovascular Disease, published in 2018.

These studies are correlative studies. That means they have demonstrated a correlation or a relationship between elevation of uric acid and the various outcomes described. These studies do not necessarily prove causation, but moving forward, we will be exploring the incredible number of mechanisms by which elevation of uric acid threatens how our blood vessels are able to function. Thereafter, I think it will become very clear that uric acid, well beyond simply being associated with these disease outcomes, is clearly playing a central role in their genesis.

You may have already had your uric acid level evaluated. So, finding out how your values relate to the levels described above may simply require a phone call to your doctor’s office. If your uric acid level hasn’t been checked, there’s good news. You can now check your uric acid level at home using a simple device much like a home glucose monitor. Having reviewed an extensive body of research on this topic, we have elucidated the goal for uric acid level is keeping it below 5.5 mg/dl. And achieving that goal may well require a reassessment of your fructose consumption, as well as a reduction in purine-rich foods like sardines and organ meats. We will soon post a much more extensive compendium of uric acid lowering strategies associated with my new book Drop Acid, so stay tuned!