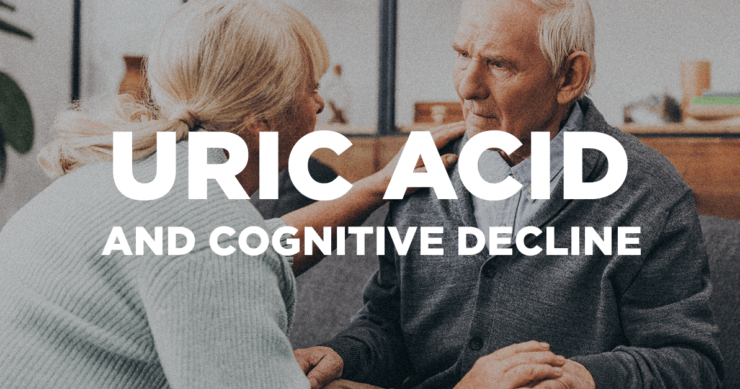 There are several key mechanisms that are directly involved in what causes our most pervasive degenerative conditions like coronary heart disease, type 2 diabetes, overweight and obesity, hypertension, and dementia of the Alzheimer’s type. These mechanisms include inflammation, metabolic issues that involve insulin resistance, and even poor blood supply. We now recognize that uric acid elevation contributes quite dramatically to these mechanisms and as such, can serve as a potential target in terms of getting to the root cause of these and other problems.

Inflammation, blood supply issues, and metabolic factors like insulin resistance are involved as primary mechanisms that lead to brain degeneration. And with the now recognized central role of uric acid in amplifying these damaging mechanisms, it seems reasonable to expect to see some correlation between uric acid levels and cognitive decline.

This relationship was evaluated by researchers at Johns Hopkins University School of Medicine and published in their report entitled Serum Uric Acid and Cognitive Function in Community-Dwelling Older Adults. The study involved 96 elderly adults and was designed to investigate the relationship between uric acid level and cognitive function. The participants were age 65 or older and each underwent a physical as well as neurological examination, a psychiatric interview, laboratory blood studies, an MRI scan of the brain, and a battery of neuropsychological tests to determine cognitive function. Specifically, the neurocognitive evaluation looked at general verbal skills, processing speed, working memory, and verbal memory, and compared how these individuals fared in terms of their performance in these domains versus their blood levels of uric acid.

The findings of the study were quite dramatic. Based on their neurocognitive testing, the subjects were ranked in four categories based upon their performance, from worst to best. These four categories are called quartiles. In the graph below, across all four domains of cognitive function, having a high serum uric acid (blue) was related to a much greater likelihood of scoring in the lowest quartile in comparison to those with a low or moderate uric acid level (green).

What this study shows is there is a very powerful correlation between high levels of uric acid and poor cognitive performance. It doesn’t necessarily prove that poor cognitive performance is caused by the elevation of uric acid. But when we circle back to what uric acid does, when elevated, in terms of inflammation, insulin resistance, and blood supply compromise, these results, looked at in this context, are all the more understandable.

Indeed, as the authors of this study concluded:

These findings suggest that high normal concentrations of serum UA should be added to the growing list of cardiovascular and metabolic biomarkers of mild cognitive impairment among elderly adults.

Cognitive dysfunction joins a long list of other maladies that have now been related to elevation of uric acid like type 2 diabetes, hypertension, obesity, and dyslipidemia. While there is no hard, set value of uric acid that will take away the risk of all of these situations, it seems reasonable to try to keep your uric acid level below 5.5 mg/dl. Fortunately, we now understand how dietary choices directly influence uric acid levels. The big players in terms of increasing uric acid are fructose, alcohol, and the breakdown products of DNA and RNA called purines. In my new book Drop Acid, you will learn about specific nutritional supplements like quercetin and vitamin C and dietary and other lifestyle interventions that are designed to normalize uric acid levels as well as how uric acid can be easily tested at home.