Uric Acid - How We Got Here - David Perlmutter MD

Uric Acid – How We Got Here 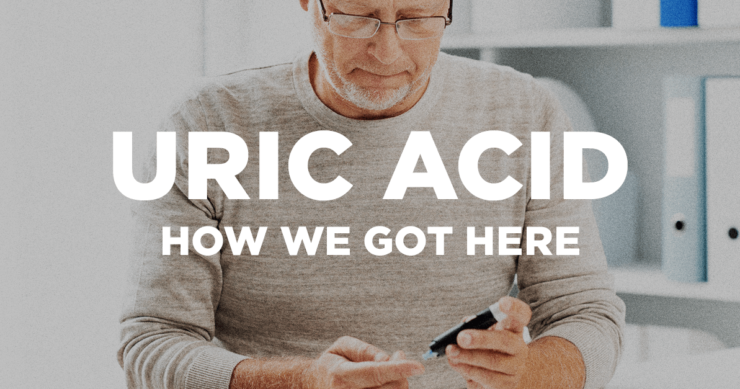 As scientific research begins to more fully understand the incredible depth of the relationship between elevation of uric acid and some of our most aggressive metabolic problems including diabetes, insulin resistance, obesity, hypertension, and dyslipidemia, it’s important to take a step back and ask, how did uric acid become the central player, mechanistically, in these issues?

To understand the how and why of uric acid, we have to go back to a place in time when our primate ancestors did not manifest the biological mechanisms for uric acid accumulation. And indeed, we need to go back a long way. Somewhere between 15 and 17 million years ago, during the Miocene period, the earth’s temperature experienced a progressive decline, and this played out as a threat to food availability for these early primates. Over several million years, adaptations took place that allowed our ancestors to make fat, store fat, and increase their endogenous production of blood sugar, glucose. Our primate ancestors that experienced genetic changes permitting these metabolic shifts to take place were the ones who survived.

We are now beginning to understand exactly what those genetic changes involved. Mammals typically deal with accumulation of uric acid by utilizing an enzyme called uricase. Uricase breaks down uric acid so it can be excreted as allantoin. The series of mutations in our primate ancestors that took place millions of years ago ultimately shut down the uricase enzyme which set the stage for accumulation of uric acid. So, all of the great ape descendants of these early primates, including chimpanzees, orangutans and bonobos, as well as we humans carry this lack of uricase enzyme. So, unlike most other mammals, we accumulate uric acid to the extent that our uric acid blood concentrations and those found in great apes are at least 10 times higher than in other mammals. And it is this genetic change or adaptation that allowed these primates the ability to make fat, store fat, and create glucose when needed. This allowed their survival in the face of an environmental stress, lack of food availability. Essentially, this was a situation of “survival of the fattest.”

The pathway then and now causes uric acid to be increased in the presence of dietary fructose and purines (breakdown products from DNA and RNA in various foods). And what proved to be a powerful survival mechanism for our ancestors, now, in the face of food abundance, is fundamentally relevant in terms of our most challenging issues from a health perspective. This survival mechanism, in one environment, is a powerful threat to human health in our modern world.

This is a classic example of an “evolutionary/environmental mismatch.” No doubt this mutation, or series of mutations, served our more recent ancestors, like hunter-gatherers, who may also have been challenged by food scarcity.

One of the most threatening aspects of elevated uric acid is how it enhances insulin resistance. These days, combating insulin resistance is certainly front and center as it relates to our goal of keeping blood sugar levels normalized. But in the context of our distant ancestors, becoming insulin resistant was actually another survival mechanism as it led to higher levels of insulin, again favoring fat storage and increased appetite. In our modern world, these are things we can certainly do without, for the most part.

With our understanding that uric acid is the end product of fructose metabolism, it’s no wonder that in the past 100 years, uric acid levels have skyrocketed in lockstep with our increased consumption of sugar. Table sugar is 50% fructose, and as such, its increased consumption has led to a dramatic elevation of uric acid, which translates to increased risk for the very situations we don’t want to find ourselves in, like being hypertensive, overweight, diabetic, or having issues with dyslipidemia like elevated cholesterol.

As we move forward and learn more about the metabolic effects of uric acid and its relationship to various disease states, as well as what we can do from a lifestyle perspective to bring uric acid under control, it’s important to recall the history of how we got here in the first place. Again, it’s not that uric acid is necessarily bad, nor is fat storage or insulin resistance for that matter. It’s really all about the context. What once proved favorable and advantageous now threatens us in terms of chronic degenerative conditions, the number one causes of death on our planet.