Why DHA Remains on the Supplement List - David Perlmutter M.D. 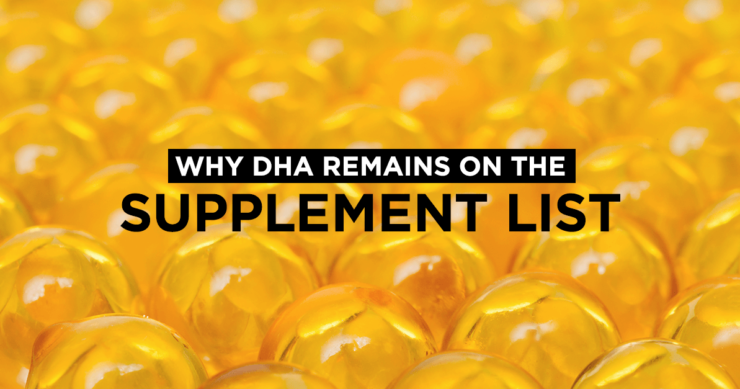 Over the past 10 years, in the various books that I have written, there has been a persistent emphasis on the importance of DHA, an omega-3, in terms of brain health. DHA represents over 90% of all the omega-3, polyunsaturated fatty acids in the brain, and further, it’s 10 to 20% of all the brain’s fat. DHA is especially concentrated in the gray matter, and is also an important part of the cellular membrane of neurons. DHA also has an important role to play in the functioning and structure of mitochondria, the release of neurotransmitters, the expression of DNA, the creation of the myelin insulation around every neuron, the management of neuroinflammation, and even the growth and differentiation of brain cells.

DHA plays a particularly important role in the frontal lobes, allowing us to maintain executive function, pay attention to the various tasks in which we are engaged, and even plan for the future and solving problems.

As important as this fatty acid is for the brain it’s incredible that neither the brain, nor the rest of the body can actually manufacture very much DHA. Two of the important enzymes that are required to make DHA from its precursor, alpha-linolenic acid, are actually fairly inefficient in humans. Nonetheless, when the brain gets a DHA delivery, it holds on to it tenaciously. In fact, it has been estimated that the half-life of DHA in the human brain is 2.5 years, whereas in the peripheral tissues half of DHA is gone in only two minutes.

Since DHA isn’t something our bodies make to any significant degree, the focus needs to be on consuming this critically important nutrient. We know that when women take DHA while they’re pregnant it tends to prolong gestation an average of 2.5 days. This translates to an average increase in birth weight by approximately 50g, which turns out to provide a cognitive advantage later in life. One study demonstrated that women taking 200mg of DHA by mouth for four months during pregnancy had children who had improved cognitive function when they were five years of age.

In the DHA Oxford Learning and Behavior (DOLAB) study, 362 healthy school children were randomized to either receive DHA or a placebo. The dosage of DHA was 600mg and was derived from marine algae. These 7-9 year-olds were then had their reading skills evaluated after 16 weeks. There were improvements in reading ability seen in all of the individuals taking DHA, but the greatest improvement occurred in those who had the poorest reading skills at the beginning of the study.

Moving on to adults,  research has demonstrated a correlation between higher levels of DHA, measured via blood tests, and better nonverbal reasoning, as well as working memory and mental flexibility in 35 to 54-year-olds.

In the now famous Memory Improvement with docosahexaenoic acid (DHA) Study (MIDAS), 485 healthy elderly individuals (average age 70 years) who had self-reported mild memory complaints, received either 900mg of DHA or a placebo for 24 weeks. In the group receiving DHA there was a demonstrated improvement in episodic as well as visual recognition memory, and a correlation between their blood DHA levels with episodic memory was noted.

Data from the Framingham Study has correlated blood levels of DHA with lower risk for mild cognitive impairment or dementia. In following 809 nine individuals (average age 76) without dementia at the beginning of the study, a check after nine years showed that those individuals with the highest DHA levels had a 47% lower risk of all dementia.

Homocystine, when elevated, is associated with increased risk for coronary artery disease, vascular dementia, and even Alzheimer’s disease. Elevated homocysteine is seen in individuals who have various genetic variations of what is called MTHFR. It is noted that DHA can actually help lower homocysteine in these individuals.

Inflammation is the cornerstone of virtually all chronic degenerative conditions including Alzheimer’s disease, Parkinson’s, diabetes, cancer, and coronary artery disease, to name a few. DHA and other omega-3s help to resolve chronic inflammation by activating what are called specialized pro resolving mediators. We are just beginning to understand this science, but the potential moving forward for ratcheting down chronic inflammation by leveraging this chemistry seems to be profound.

Finally, scientific research is now focusing on what is called the endocannabinoid system, in terms of regulating inflammation within the body. Two well-studied chemical components of this system, anandamide and 2-AG, bind it to a specific cell surface receptor which leads to basic need uptick in inflammation, fat production, fat storage, and triglyceride production. Omega-3s, like EPA and DHA, are able to produce other cannabinoids that inhibit this receptor stimulation, and as such help to reduce inflammation in the body.

These are some of the many reasons that DHA is really important. It’s something that needs to be taken as a supplement, unless you’re eating fatty fish regularly. A typical serving of salmon, for example, will contain approximately 200mg of DHA. That said, my recommendation is to consider, as an adult, approximately 800mg of supplemental DHA daily. This can be fish-derived or, for vegetarians, derived from marine algae.

I’m often asked in various interviews to describe my top 10 supplement recommendations. Clearly, there is no question that DHA should absolutely be on the list.

For more of my favorite supplements, check out this blog post.