Why is the "Alzheimer's Gene" So Common? - Dr. David Perlmutter

Why is the “Alzheimer’s Gene” So Common? 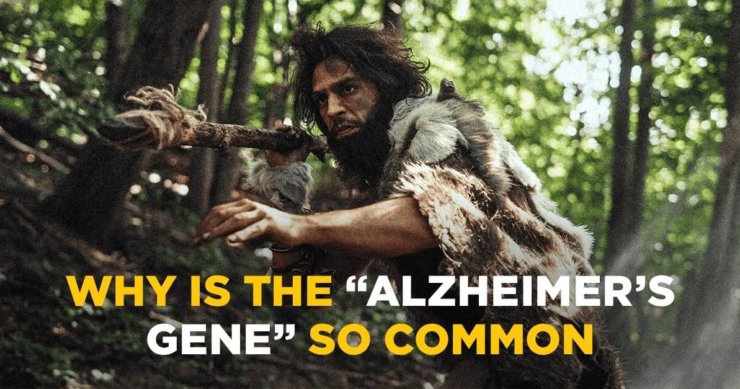 Now that so many people are having their genomes sequenced, the role of the APOE-4 allele in terms of its association with a dramatic increased risk for Alzheimer’s disease (AD) is getting a lot of attention. Carrying one allele for APOE-4 is associated with an approximately fourfold increased risk for AD, while carrying two APOE-4s may be associated with an increased risk by as much as twelvefold. Nonetheless, carrying APOE-4 doesn’t guarantee the development of AD. And AD can certainly manifest without APOE-4 being present.

The APOE-4 gene allele isn’t just a risk factor for Alzheimer’s disease but is also associated with increased risk for dementia in general and cardiovascular disease as well.

So the question should be asked: if this APOE-4 gene allele is so threatening to our health, why has it persisted in the human population? Typically, we would expect genes that increase risk for disease to disappear over time through natural selection. And yet, 10-15% of humans carry this gene. Could it be that having one or even two of the APOE-4 gene alleles could offer up some kind of survival advantage?

We begin to get a sense that there may indeed be an advantage to carrying APOE-4 when observing that while it is found in 10-15% of humans worldwide, there is a dramatic geographic variation in terms of its prevalence, varying from <5% to >45%, with higher frequencies nearer to the equator and in tropical latitudes. And one important characteristic of these areas is higher risk for various types of infections from things like parasites.

So the question becomes, could carrying the APOE-4 allele have persisted because it offers up some protection against parasitic infection? This is the central question recently explored by an international group of researchers publishing in The Journal of the Federation of American Societies for Experimental Biology.They traveled to the Amazon where they studied 372 members of the Tsimane population, a traditional, non-industrialized group of forager-horticulturalists. The subjects underwent genetic analysis for the E4 allele, a measurement of their individual parasitic burden, as well as a measurement of their cognitive performance.

When the data were reviewed, the scientists found that those individuals with a high level of parasites who did not carry E4 showed worse cognitive performance in comparison to those who also had high levels of parasites and did in fact carry the “Alzheimer’s gene.” In other words, in the context of higher levels of parasites, having this gene was an advantage as it related to brain performance. The authors concluded:

Being an E4 carrier is the strongest risk factor to date of AD and cognitive decline in industrial populations; it is associated with greater cognitive performance in individuals facing a high parasite and pathogen load, suggesting advantages to the E4 allele under certain environmental conditions. The current mismatch between postindustrial hygienic lifestyles and active parasite-rich environs may be critical for understanding genetic risk for cognitive aging.

This study thus offers up a fascinating explanation as to why this seemingly detrimental genetic predisposition is so prevalent in our modern world. In discussing the incredible emphasis on hygiene in our modern world, the authors go on to say:

Modern lifestyles in such populations are an evolutionary novelty; >99% of human history occurred in small, mobile hunter–gatherer groups without access to sanitation or clean water. The current mismatch between modern hygienic lifestyles and active parasite- rich environs may be critical for understanding the evolution of genetic risks for cognitive aging.

As is so often the case, we tend to look upon things related to health as being categorically good or bad. But, as it is with gut bacteria, for instance, variations in our genetic makeup may be threatening or salubrious based upon context. In this case, APOE-4 in the context of the environment of our ancestors provided a benefit. And it is only in recent years with the adoption of hygienic sterilization of our environment that the context has changed, allowing APOE-4 to pose a threat to our brain function.

New Medication Associated with a 50% Risk Reduction for Dementia!
Support for Weight Training in Your Brain Program
Positive Brain Effects of Microdosed Psychedelics