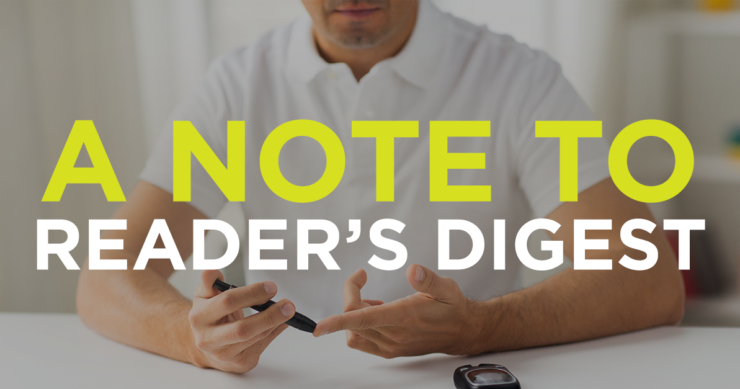 I recently reviewed some content on your website that identified The Best and Worst Drinks for Diabetics, and your recommendations were such that I feel compelled to author this response.

In this discussion, which is actually supportive of artificially sweetened beverages your page indicates:

… the American Diabetes Association still suggests that diet soda is a better alternative to a sugar-packed version for people watching their blood sugar. How much: If you already have a soda habit, it’s probably OK to sip one a day instead of a sugary version.

This unfortunate recommendation will likely endanger many diabetics and countless non-diabetics.

As noted in an extensive study published in the American Journal of Clinical Nutrition, involving nearly 70,000 women over 14 years, researchers found that subjects consuming sugar sweetened beverages were at an increased risk for becoming type 2 diabetics. Their risk was increased by around 34%. No surprise. But what was remarkable was the finding that those women who chose to drink sugar-free, artificially-sweetened beverages experienced an increased risk for diabetes that was more than doubled this!

Further research now shows that the reason people become less glucose tolerant when drinking artificially sweetened beverages likely has to do with the profound changes that are induced in the gut bacteria as a result of consumption.

Granted, it would seem like opting to drinking sugar-free beverages is good advice, and it is. Your discussions about tea and coffee, and certainly water, are solid. But artificially sweeteners are strongly linked to both obesity and diabetes risk, and should absolutely be avoided.